We sat down with Matt Privat of Roly Poly for our first-ever profile piece.

176
SHARES
FacebookTwitterSubscribe
#mc_embed_signup{background:#fff; clear:left; font:14px Helvetica,Arial,sans-serif; } /* Add your own MailChimp form style overrides in your site stylesheet or in this style block. We recommend moving this block and the preceding CSS link to the HEAD of your HTML file. */
Subscribe To Our Digest!
* indicates required
Email Address *
Digest Frequency (select one or both) Daily Weekly/Monthly
(function($) {window.fnames = new Array(); window.ftypes = new Array();fnames[0]='EMAIL';ftypes[0]='email';fnames[1]='FNAME';ftypes[1]='text';fnames[2]='LNAME';ftypes[2]='text';fnames[3]='ADDRESS';ftypes[3]='address';fnames[4]='PHONE';ftypes[4]='phone';}(jQuery));var $mcj = jQuery.noConflict(true); 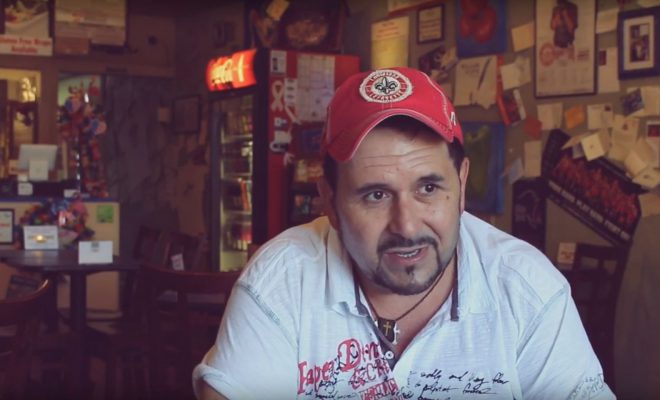 The Roly Poly Guy, the Cookie Monster, whatever you call him, you love him. We sat down with Matt Privat, owner of Roly Poly, to find out more about the man behind the counter.

Matt loves his job at Roly Poly, but if you would have asked him in 2009 if he’d be talking sandwiches and working behind a register he probably would have laughed at you. What started as a six month long effort to help a friend has turned into a jump into entrepreneurship. Matt was born in Rayne and attended college at USL (UL for Lafayette newbies). While in school he helped manage a family restaurant but moved onto residential appraising after graduation. He spent 18 years in that career before being approached by a friend to help out with Roly Poly. It did so well that he offered to sell it to Matt for a deal he couldn’t resist (even though he tried).

“I got into the restaurant business for myself, kind of by accident. It just goes to show you that whatever goes on in life you never know what’s going to happen.”

When Matt first began his restaurant endeavor, his Roly Poly was ranked about 274/380 in the country. For the last six years though, he has stayed in the top 10 for sales in the nation. He credits close approximation to UL, Lafayette General, and the offices around Roly Poly for all the success; as well as his big mouth and Roly Poly’s good food. Things are going so well that he hopes to open a Youngsville location soon.

How does he keep customers coming back for more? He quotes his grandma, saying “You reap what you sow” He tells me that it makes a big difference when the business is yours. It’s the little things he comes up with that make his business successful, such as making personal suggestions and giving away free cookies. Apart from helping his business, he likes seeing the joy on people’s faces.

“I try to make sure that everyone that comes into my restaurant feels special, that they’re entertained, that the food is really good, that the service is really good and fast, and it seems to work…you never know who’s day you may have changed just a little bit.”

Along with being his own boss, Matt loves the opportunity that entrepreneurship gives him to be a part of the Lafayette community. What does he love best about Lafayette? The great restaurants, low crime, and friendly, talkative people who are always willing to help each other out. His advice for someone wanting to open their own business? “Take a chance. There is nothing better than being your own boss. If you take the time with it and baby it like you would a child, you’ll do good. If you have a little setback…you just keep going. You’ll end up being so much happier when it’s yours.”