1.3k
SHARES
FacebookTwitterSubscribe
#mc_embed_signup{background:#fff; clear:left; font:14px Helvetica,Arial,sans-serif; } /* Add your own MailChimp form style overrides in your site stylesheet or in this style block. We recommend moving this block and the preceding CSS link to the HEAD of your HTML file. */ 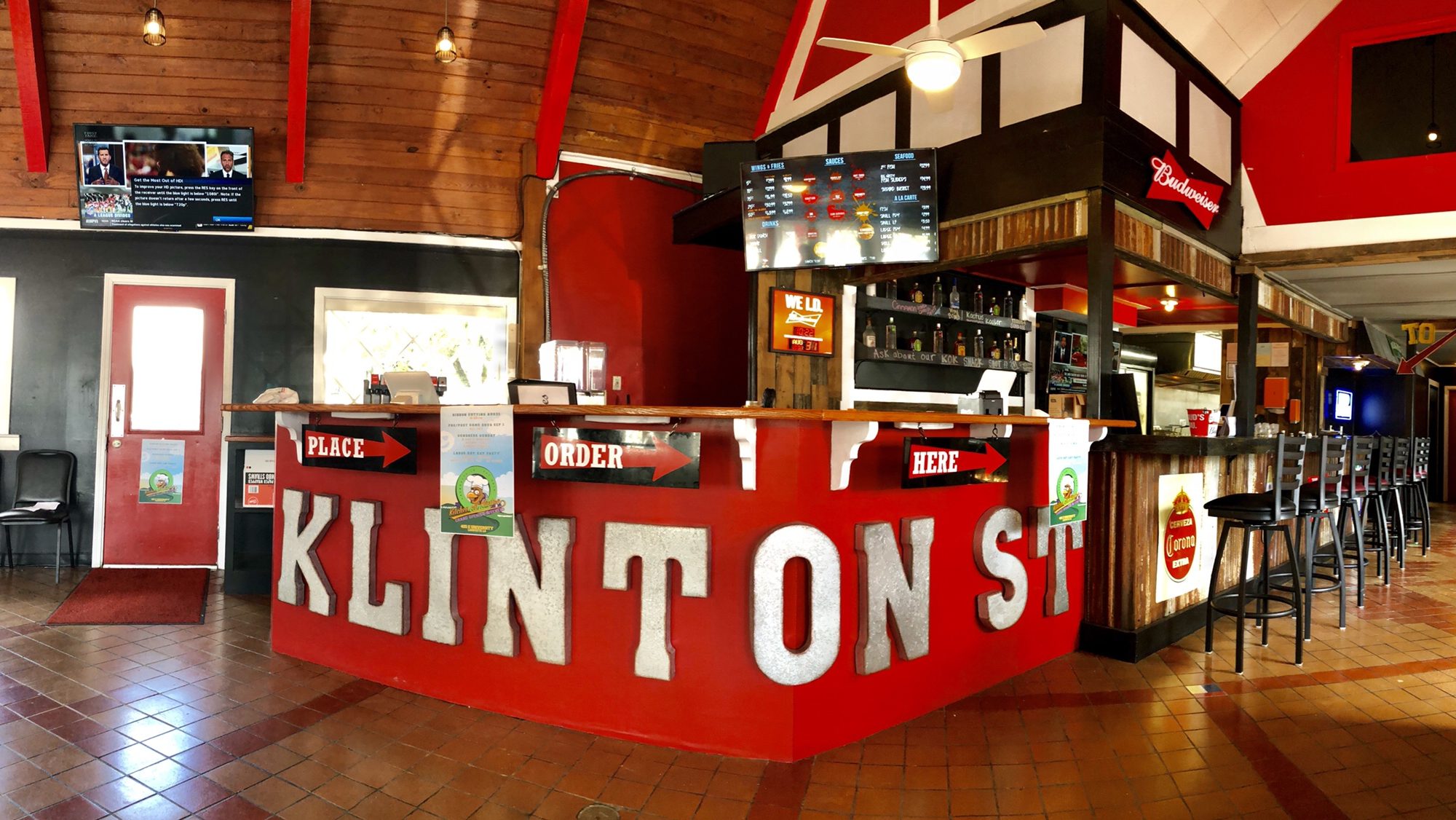 When four young college students decided to start cooking for a few friends, they didn’t quite expect where they would end up.

Late in the Fall Semester of 2016 at the University of Louisiana at Lafayette(ULL),  four friends & fraternity brothers, Avery Bell, Corey McCoy, Tre’Jan Vinson, and Jared Johnson decided to cook for a few friends at their 117 Klinton Street residence. And while cooking for friends out of your home’s kitchen is perfectly acceptable and is a great way to throw a get-together, but it isn’t a business. However, the four friends knew that they wanted to be in business with each other. So Avery and Corey had the idea that maybe the four could go into business together in the food industry cooking tasty wings & fries like they have done so many times for their close friends. So the guys started catering for lots of parties, small get-togethers, churches, and even popping up a tent at local fairs—calling themselves, Kitchen On Klinton(KOK).

In 2017, Kitchen On Klinton made one of their biggest breaks by serving their homemade chicken wings & fries to the Mardi Gras crowds in Franklin, LA. This was one of those events where the KOK guys knew that they had something special. Throughout 2017, KOK pushed through with this business idea, and have encountered many challenges along the way. Challenges that many going into business do not consider, like the need for a great supplier. And since KOK was gaining in popularity, the guys would often make product runs to many of the local supermarkets and nearly cleaned out all of the fresh chicken during each run. As you could imagine, those markets began to notice an accelerated depletion of product and knew when the KOK guys showed up that they were there to clean them out. Things eventually started getting so busy for KOK that simply hauling around a tent and a couple of cast iron fryers—provided by Corey’s Dad—to an event was no longer practical, and enhanced mobility was a necessity. So Avery’s father pitched in to help the guys by custom building a simple food trailer for the young entrepreneurs. This food trailer—even without air conditioning—has served as KOK’s main mode of face-to-face business with their growing fan base. Now that KOK has a food trailer, they didn’t quite think about how they would pull this trailer. And just like a good set of entrepreneurs, they used available services like U-Haul by renting a truck to tow them from event to event, which became increasingly more expensive as time went on. The guys knew that in order to be sustainable, they needed to have their own truck. So the guys went to bank after bank, after bank, and were denied any sort of loan to purchase a truck for themselves, but they kept trying. On the eleventh attempt at receiving a loan, the KOK crew managed to get approved for a loan, which led to mobile freedom.

While starting a business may seem cool or even romantic, it also comes with many potential hardships along the way. And when it comes to KOK, they were no exception to the hardship rule. All four of the guys didn’t take much of a salary for the better part of 2017. Things even got so bad that Corey, who graduated from ULL with a degree in Education had to go back to work for a short time as a teacher at Acadiana Middle just to make it through. Another one of the guys, Tre’Jan, was out for three months suffering from a broken ankle after a refrigerator fell on top of him. But all four of the guys continued to push through and even graduated from ULL during 2017-2018—their busiest year in the food business. Tre’Jan Vinson got his degree in public relations, Corey McCoy graduated with a degree in education, Avery Bell came through with a degree in Sociology, and Jared Johnson graduated with a degree in finance. Even with all of the degrees and hardships, the four frat brothers state that anytime is a perfect time to pursue a dream.

It is now the latter portion of 2018, and in less than three years the KOK guys are making their next big move through the restaurant business by committing to opening a full-on Kitchen On Klinton Sports Bar & Grill at 405 E. University, formerly known as Gallagher’s. The brick & mortar location is a big deal for the small Lafayette business. After all, it literally started out of a small kitchen on 117 Klinton Street. The KOK crew have worked hard to get to this point and they are excited about the future.

KOK’s Ribbon Cutting is Today, Friday, August 31st, 2018. Check these guys out! The KOK team is top-notch, and are grinders! facebook.com/KOKlinton or instagram.com/koklinton. 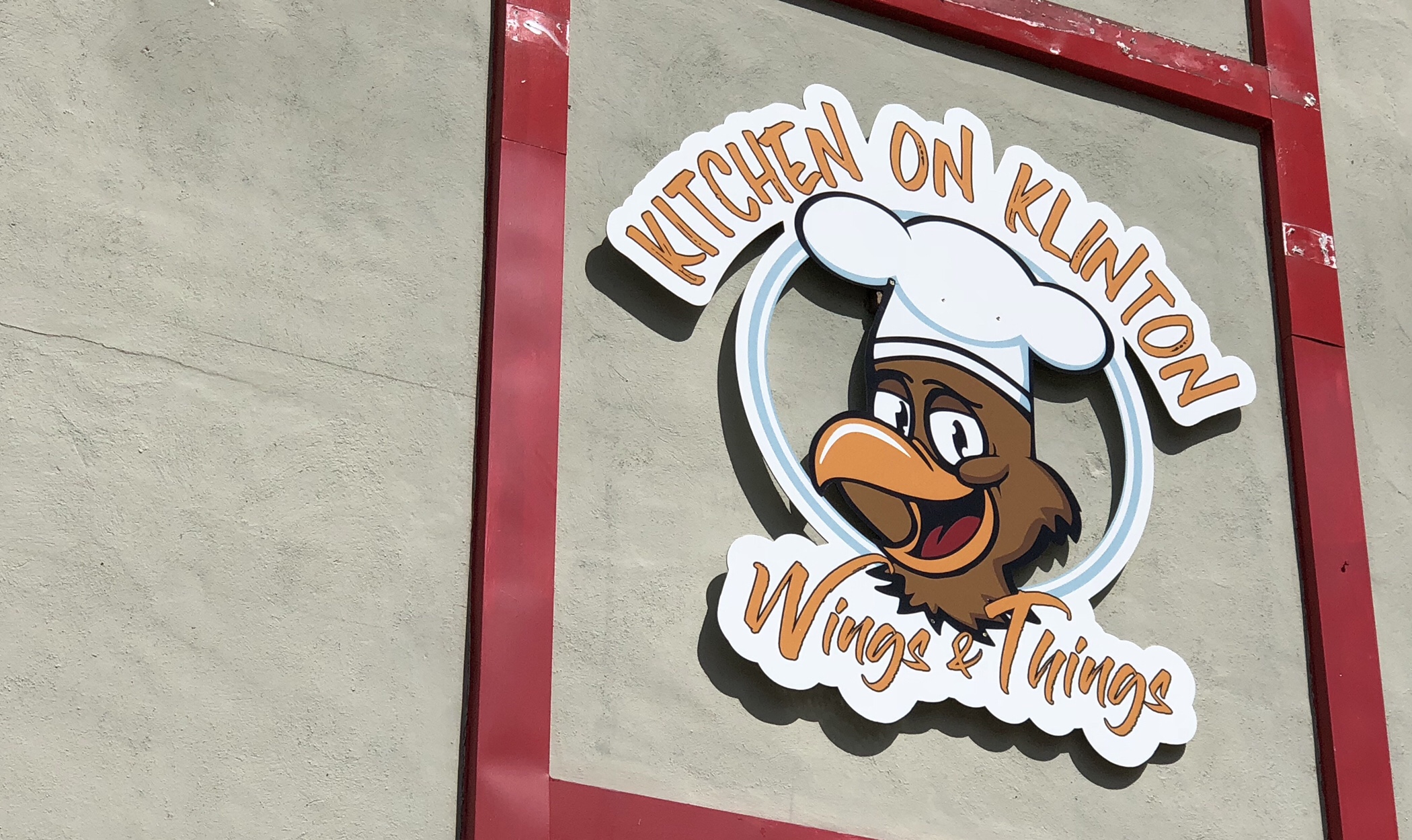 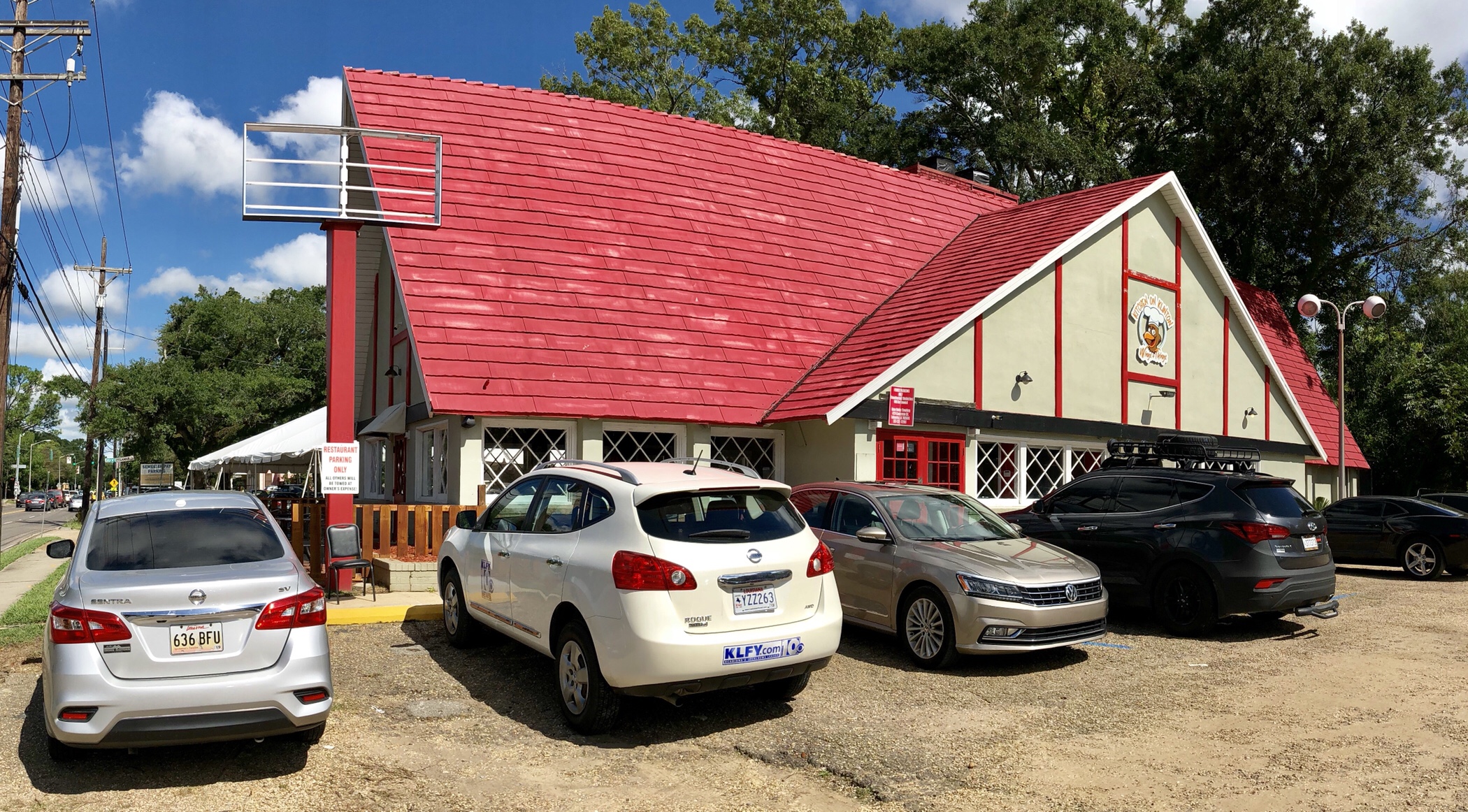 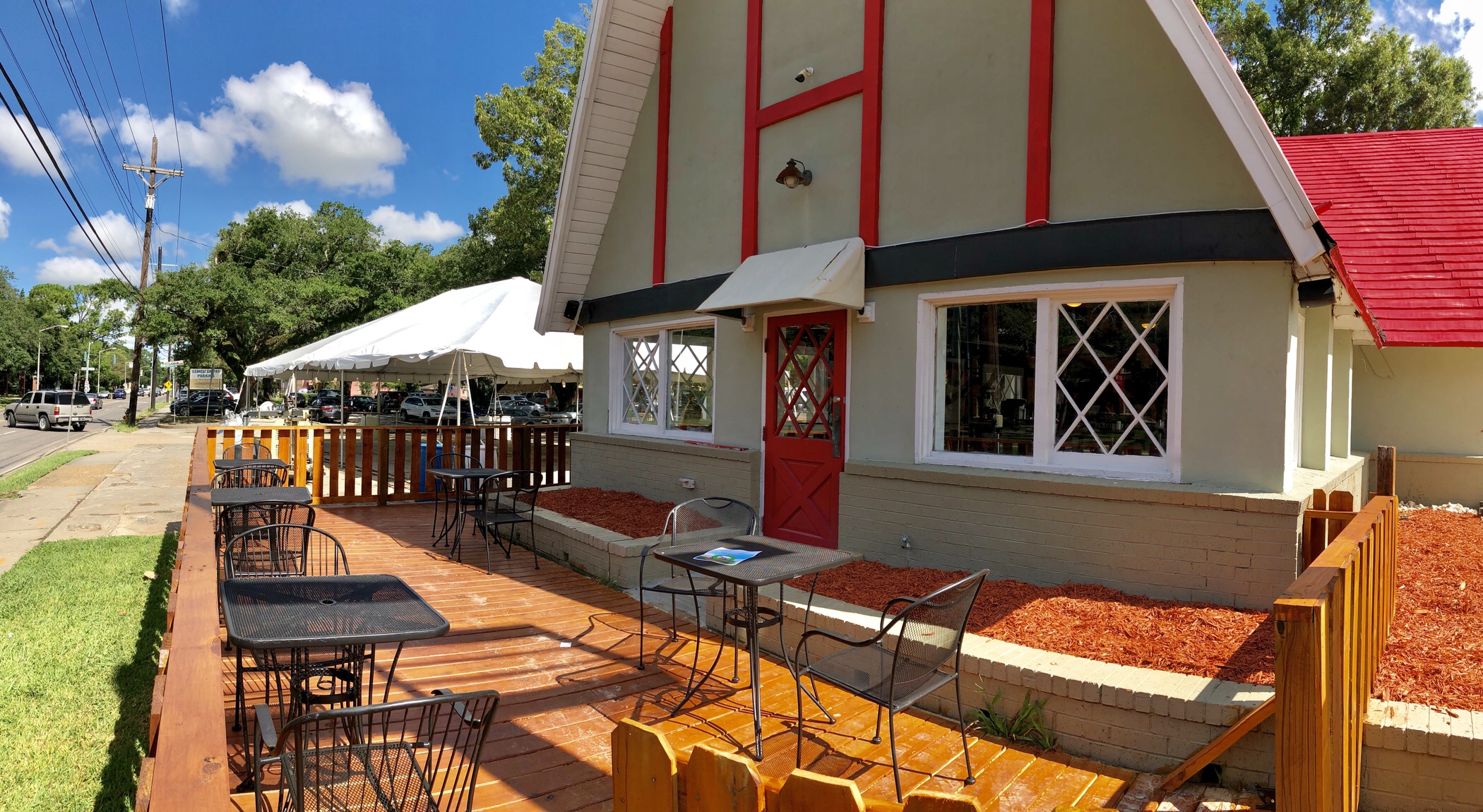 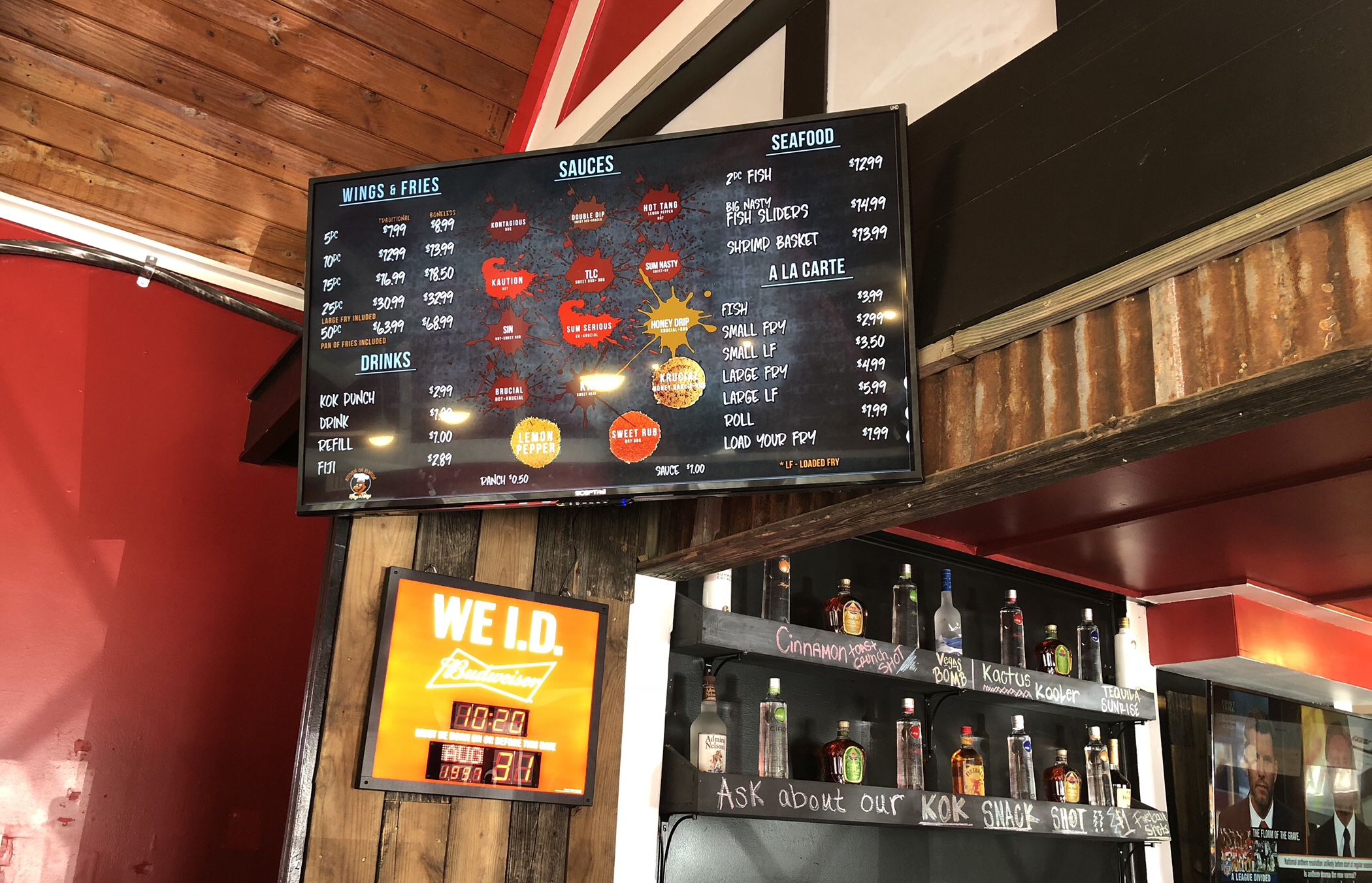 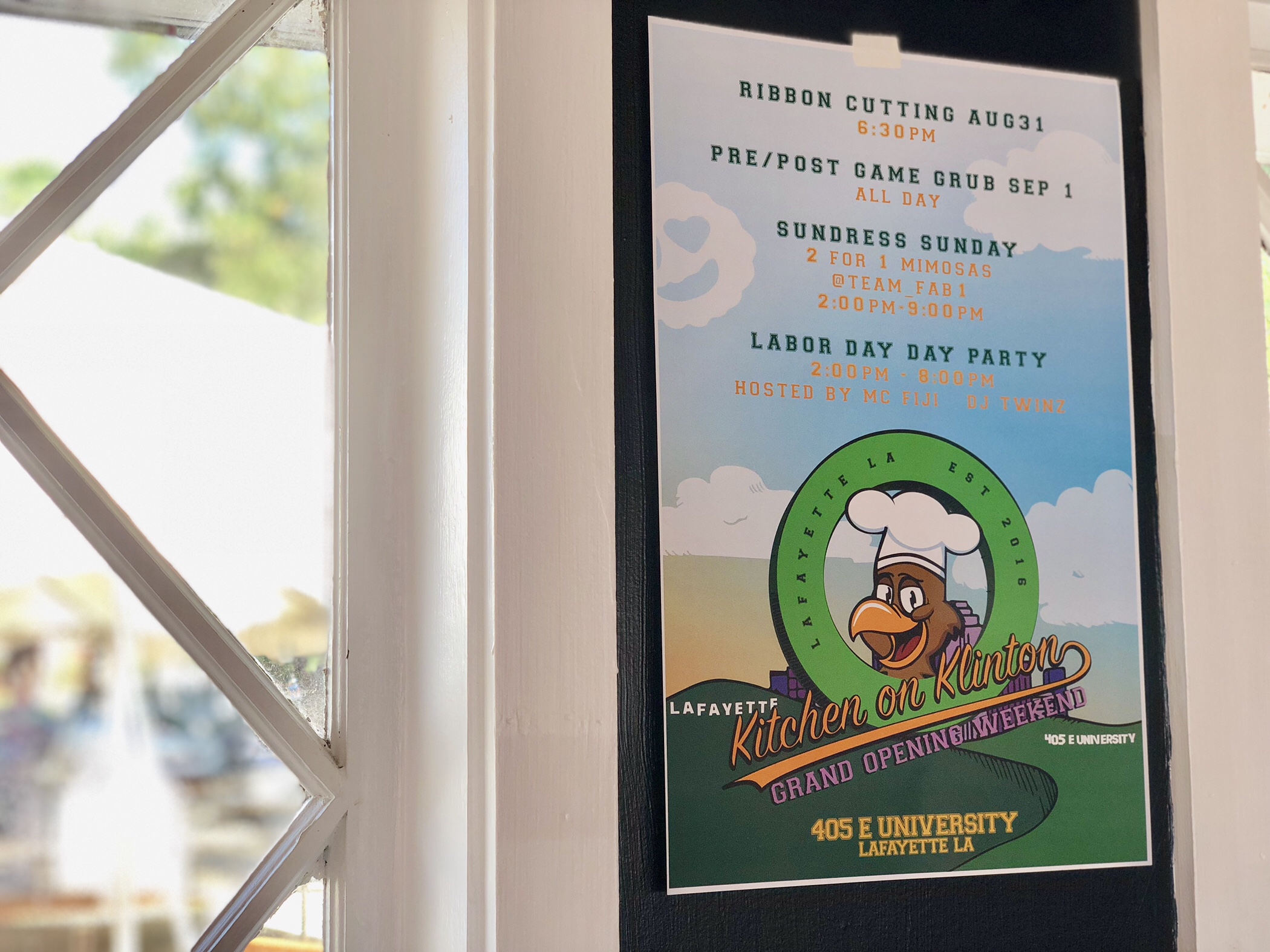 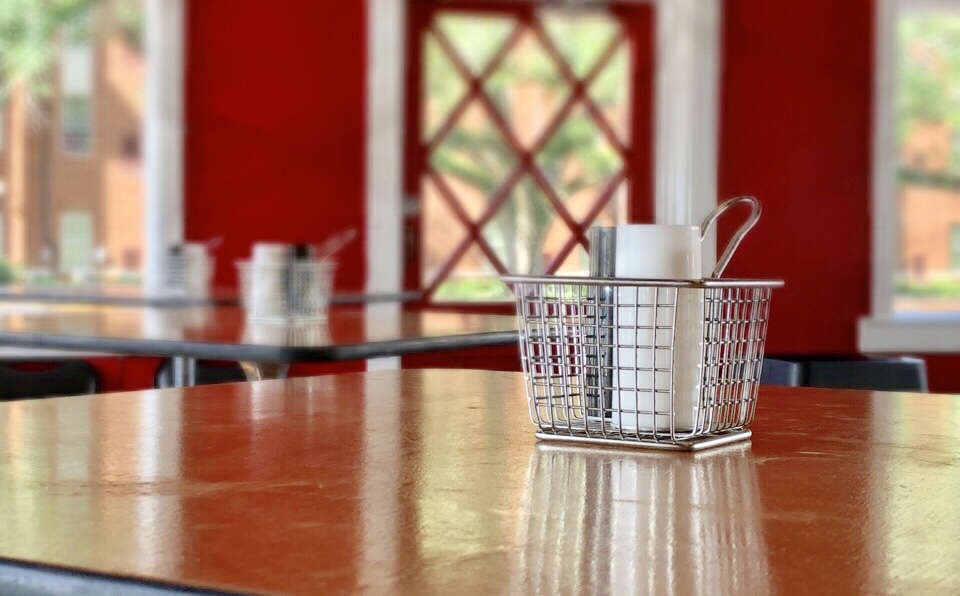 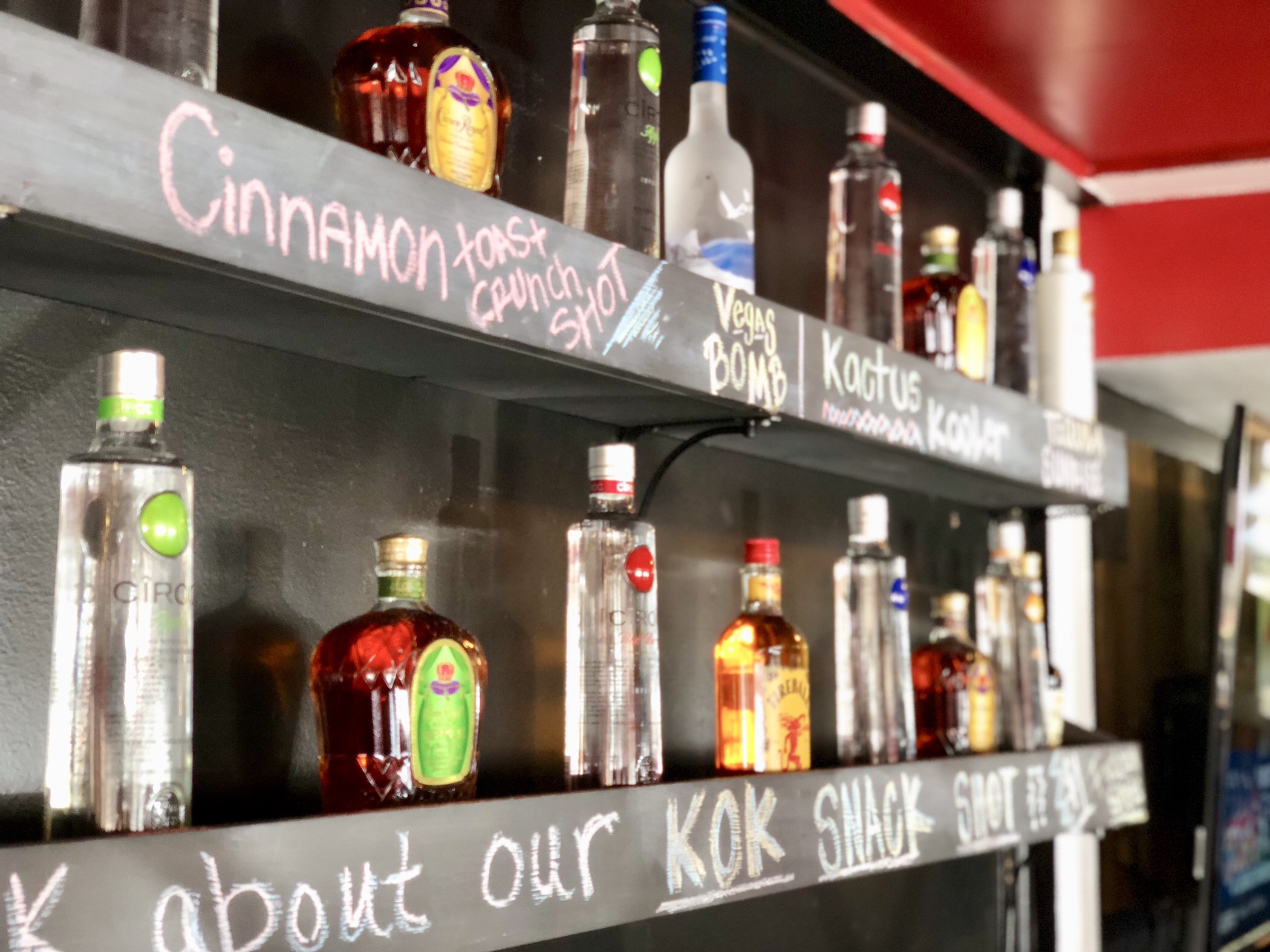 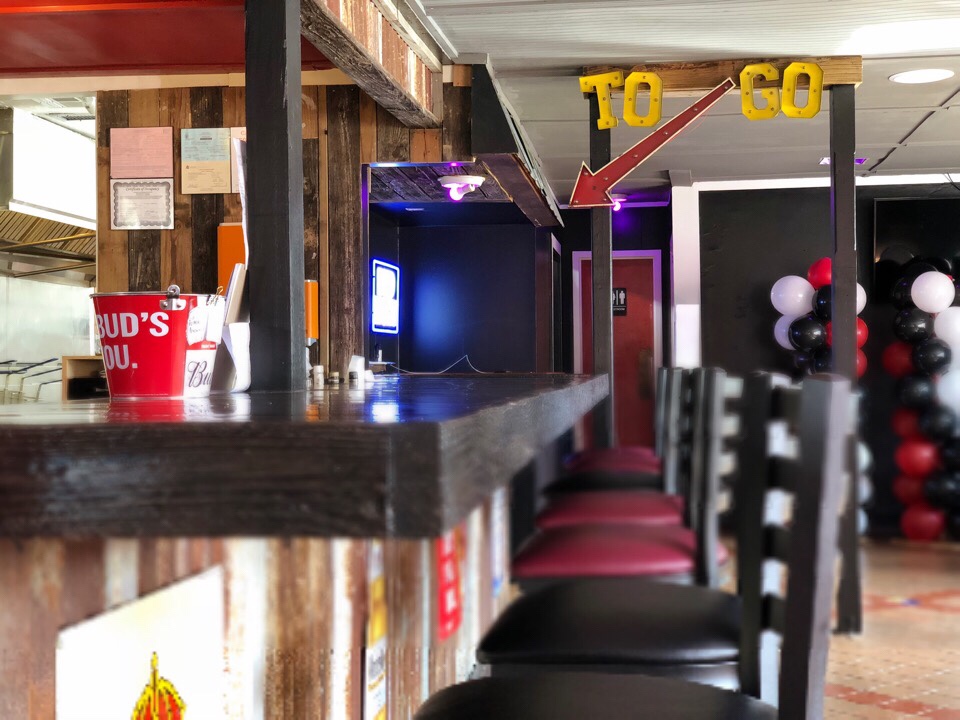 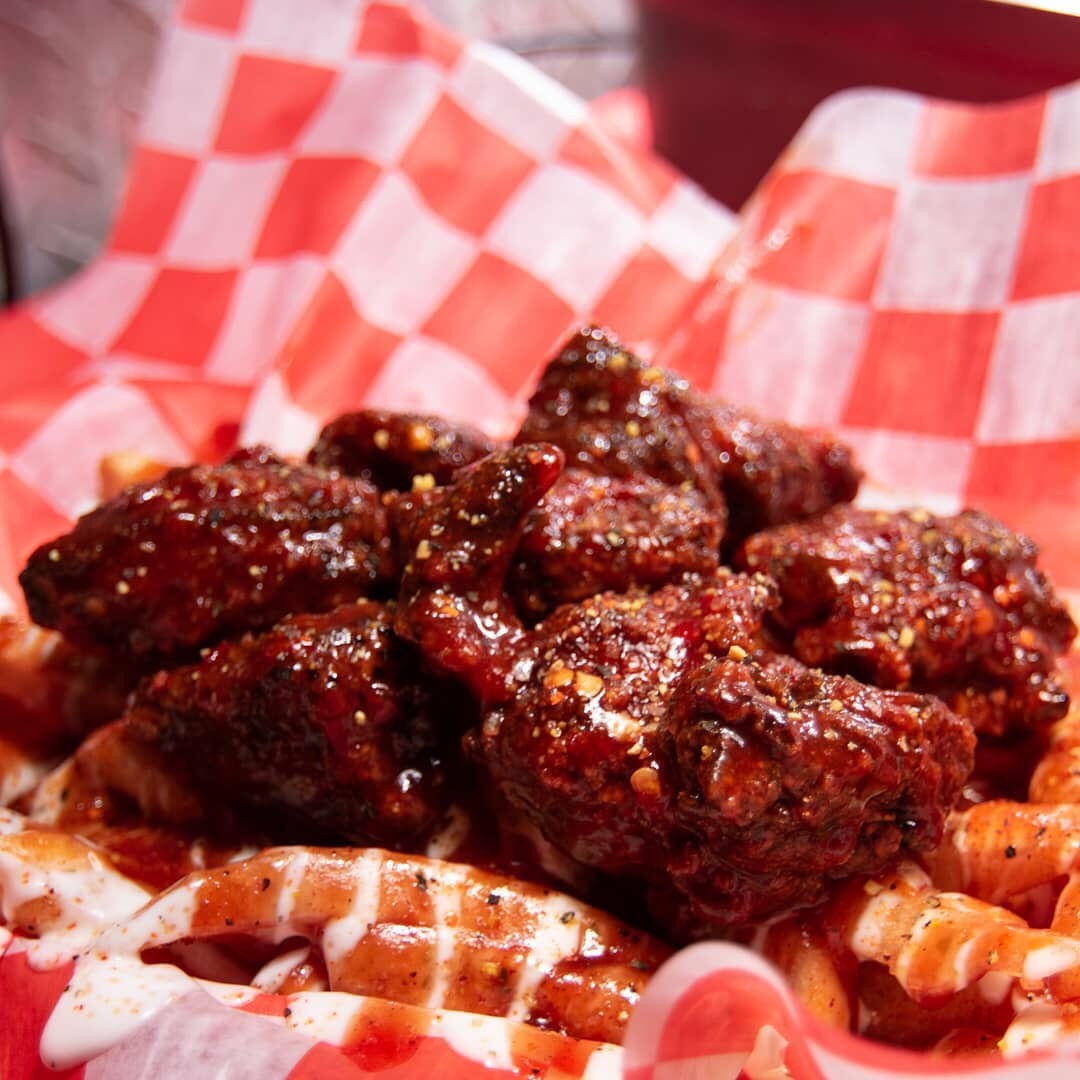 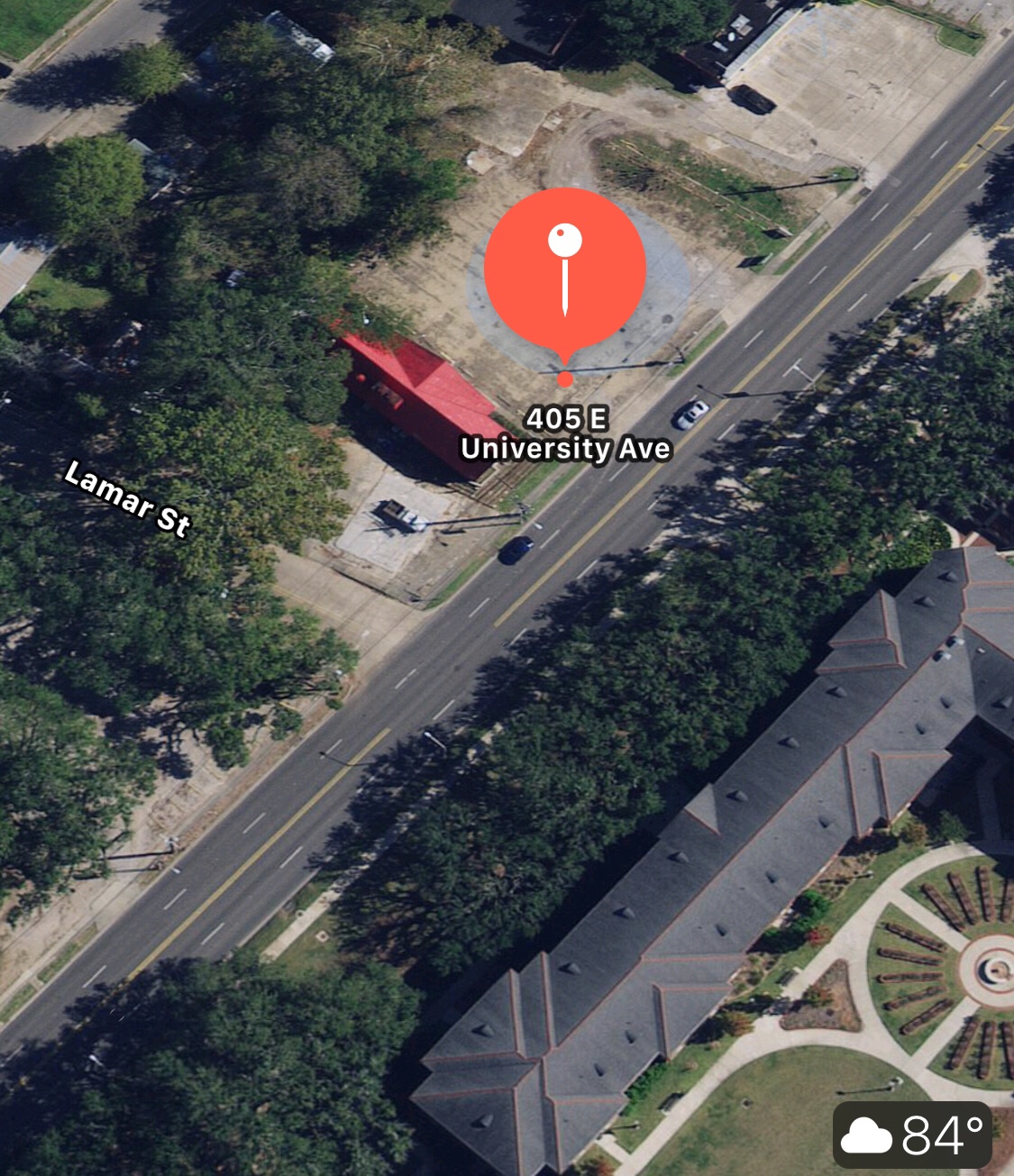