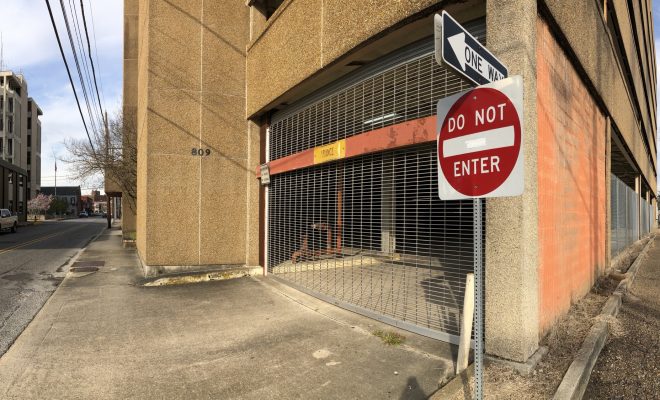 Lafayette Consolidated Government (LCG) officials announced today that the Buchanan Redevelopment Site Request for Proposals (RFP) released in March 2019 is officially canceled. According to Director of Development and Planning, Danielle Breaux, LCG carefully considered four proposals received for the site’s redevelopment and it has been determined from LCG’s perspective that none of the proposals are financially viable.

There were 4 proposals submitted, one of those proposed projects — seen here — was the $83 Million mixed-use DreamHouse project that would have consisted of a boutique hotel, coexist living units, commercial space, and an expanded garage that would have not only yield the number of parking spaces lost, but it would have also added about 300 more spaces. Though, the increase in spaces would have been mostly used for tenants & hotel guests.

All four projects ranged from a cost of $3 million on up to $80+ million.

Also announced today, LCG is conducting an additional assessment of the Buchanan Garage to ascertain the overall current condition of the outside concrete panels, the safest method to remove the panels to evaluate the structure below, and their connections as they relate to safety concerns identified in the October 2018 assessment. LCG Interim Public Works Director, Chad Nepveaux expects the assessment of the garage to take approximately 30 days.

Mayor-President Josh Guillory believes there is great opportunity with this site and intends to discuss the status of the Buchanan Street Parking Garage and options for its future along with the future of the larger redevelopment site located in the heart of downtown with both the city and parish councils.