720
SHARES
FacebookTwitterSubscribe
#mc_embed_signup{background:#fff; clear:left; font:14px Helvetica,Arial,sans-serif; } /* Add your own MailChimp form style overrides in your site stylesheet or in this style block. We recommend moving this block and the preceding CSS link to the HEAD of your HTML file. */
Subscribe To Our Digest!
* indicates required
Email Address *
Digest Frequency (select one or both) Daily Weekly/Monthly
(function($) {window.fnames = new Array(); window.ftypes = new Array();fnames[0]='EMAIL';ftypes[0]='email';fnames[1]='FNAME';ftypes[1]='text';fnames[2]='LNAME';ftypes[2]='text';fnames[3]='ADDRESS';ftypes[3]='address';fnames[4]='PHONE';ftypes[4]='phone';}(jQuery));var $mcj = jQuery.noConflict(true); 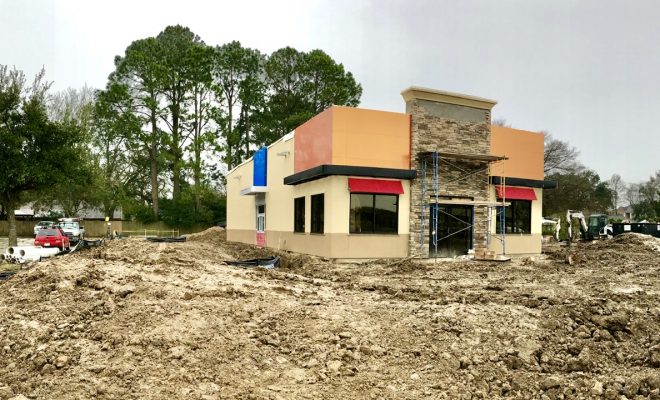 Lafayette’s second Dairy Queen, located at 2121 Kaliste Saloom Road, is making quick progress toward opening. So fast, that we have already had to retake photos of it three times due to not posting it quick enough.

We originally posted about the new, second Dairy Queen on September 9th, 2019, right as construction was starting. So plenty of progress has been made with only a little left to go until it opens.

We estimate that the new Dairy Queen will open mid to late February, which would be just in time for all of the Catholic folks to indulge before giving it up for lent. That is, if you give it up for lent… 😉

If you were lucky enough to live in Lafayette during the opening of the first location (seen here) then you might remember the long drive-thru lines that lasted for weeks. Well, be prepared, because it could happen again with this location. In fact, the traffic situation was so bad for the first opening that a Lafayette Police officer had to direct traffic during peak hours—crazy right?